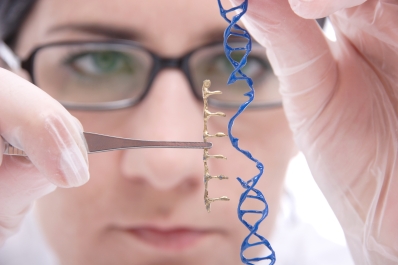 A single injection. That’s all someone with a factor VII deficiency would need for a life-long cure, thanks to a new gene therapy treatment developed in a collaboration of researchers at the University of North Carolina (UNC) and The Children’s Hospital of Philadelphia (CHOP).

Factor VII deficiency is a rare blood disorder that can lead to profuse bleeding after injuries, including minor cuts. Currently, patients must be injected regularly with protein factors. But the new gene therapy approach, details of which were published in the journal Blood, would require only one injection and occasional follow up to ensure that the body is still producing proper amounts of factor VII.

“For many people living in the developing world, constant injections aren’t practical or at least not feasible right now; but a single injection could be,” said Tim Nichols, MD, who led the UNC team and is professor of medicine and pathology at the UNC School of Medicine. “We’ve now shown that this treatment is safe and effective for dogs with inherited factor VII deficiency. This is exciting because our other gene therapy work on bleeding disorders, such as hemophilia, has demonstrated that safety and efficacy in dogs has translated well in human clinical trials.”

Certain populations of dogs have factor VII deficiency, and Nichols said he wouldn’t hesitate to treat them with this new gene therapy.

In people, factor VII deficiency is rare, occurring in an estimated 1 in 300,000 to 500,000 births. Both parents must carry the defective gene for their children to have the disorder. Without enough factor VII, people cannot form clots properly. Babies are typically diagnosed within six months of life, usually after an episode of profuse bleeding in the brain or the gastrointestinal tract.

After early childhood, people with factor VII deficiency typically do not experience spontaneous bleeding, but they are susceptible to serious bleeding after surgery, and they bruise easily. A cut or injury on the skin or in the mouth or nose can lead to severe bleeding. Women with factor VII deficiency can suffer from heavy bleeding during periods.

For the study published in Blood, Paris Margaritis, DPhil, the lead researcher at The Children’s Hospital of Philadelphia and Penn’s Perelman School of Medicine and the senior author of the study, and his colleagues cloned the canine factor VII gene and developed a method to package a substantial number of factor VII genes inside an adeno-associated virus (AVV) vector – a sort of transport system, a virus that’s been rendered harmless.

Meanwhile Nichols, the director of the Francis Owen Blood Research Laboratory at the UNC School of Medicine, characterized the factor VII deficiency in each of four dogs. Then he treated each of them with a different amount of the AAV therapy. The amount of factor VII produced was directly proportional to the amount of vector given to the individual dogs. Over the next three years, Nichols’s team characterized the health of the dogs.

Nichols also worked with The CHOP researchers to analyze the factor VII gene expression data. One dog received the amount of AAV associated with the maximum amount that a human could likely tolerate before increasing the risk of an immune system response against the therapy itself. This dog produced 30 percent of the amount of factor VII that a normal dog would produce. This amount of factor VII would be more than enough to cure the dog.

“This is the only large animal model that represents the majority of factor VII mutation types,” Margaritis said. “Our data are the first to demonstrate feasibility, safety, and long-term duration of AAV gene therapy for factor VII deficiency. The table is now set to propose clinical trials that would treat people who suffer from this disease.”

Back to the future,the past and the present

in search of Physics